Writing assistant for researchers and professionals

Transform your writing to professional English 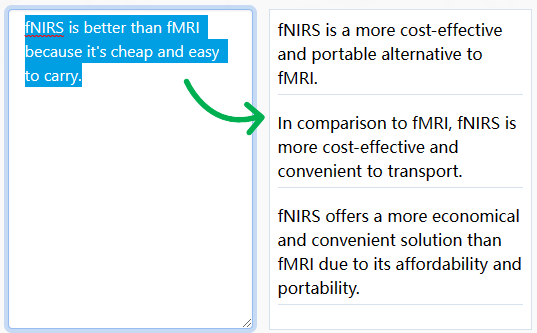 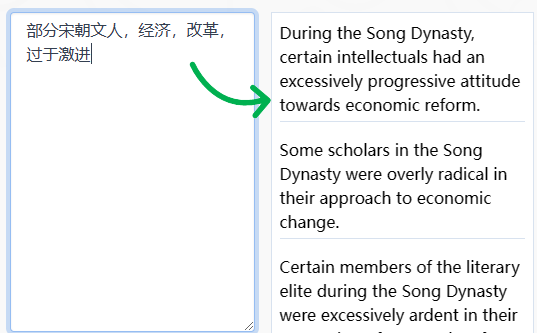 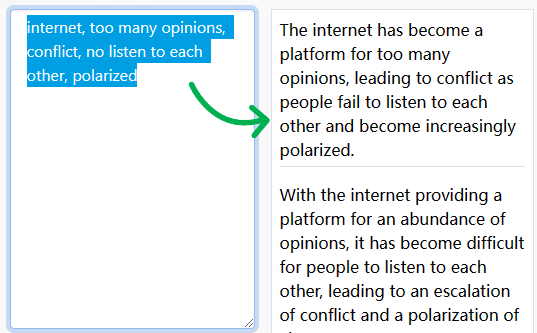 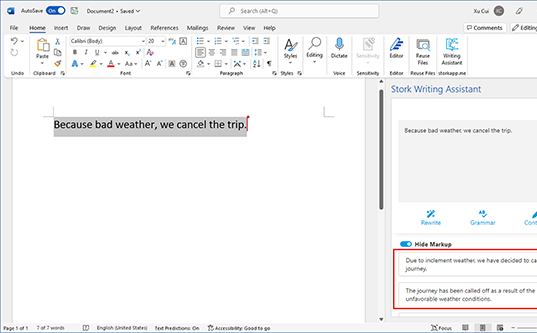 “Writing Assistant is an exceptional platform for verifying spelling and grammar. It also provides users with a variety of suggestions to alter their tones or enhance their writing's clarity. Highly recommended!

“Writing Assistant is an excellent tool for scientists and researchers to improve the quality of their publication writing. Even though I have very extensive scientific writing experience, I have been using Writing Assistants to edit my papers. I highly recommend Writing Assistant for those whose native language is not English or who lack writing skills and ideas.

“Writing Assistant not only helps identify and correct grammar and spelling mistakes, but also enhances the overall style and clarity of my writing. It made my manuscript more professional and easy to read. If you are a non-native speaker who wants to write clear and effective academic papers in English, I highly recommend giving this tool a try.

“In the past, the task of writing was often time-consuming due to the need to select the right words and arrange them into meaningful sentences. Fortunately, Writing Assistants have made this process much simpler by providing multiple sentences with the same meaning. This has made writing much more efficient and enjoyable.

“Writing Assistant was able to take my Chinese writing and turn it into a more authentic and beautiful English. To my surprise, it was able to further refine my writing, using different grammatical structures and vocabulary to express my meaning in a more accurate American English. This is a remarkable feature.

Rewrite a sentence or paragraph, grammar check and continue writing

Before: Because bad weather, we cancel the trip.

After: Due to the inclement weather, we have been forced to cancel the excursion.

In this example, the word "bad" is rather informal. "Inclement" is a much better choice. "Because" is also changed to "Due to".

Before: fNIRS is better than fMRI because it's cheap and easy to carry.

After: fNIRS is more affordable and portable than fMRI, making it a more practical option for many people.

The words "cheap" and "easy to carry" are too informal. "Affordable" and "portable" are better choices.

Before: The teacher’s encouragement made me want to do better in my study.

After: The teacher's support motivated me to strive for better grades.

"make" and "want" are changed to "motivate" and "strive".

Before: We used device purchased from X company to measure light intensity.

After: We used a device purchased from X company to measure light intensity.

Before: Our of 100 samples, we selected 54 which showed blue.

Before: 5 faculty from our university attended the confrence.

After: Five faculty members from our university attended the conference.

When writing papers, we often need to reference sentences published by past researchers to support our views. To avoid being accused of plagiarism, it is important to paraphrase the sentences.

Before: Lung cancer remains the leading cause of cancer deaths in the United States and the world.【Farooq 2020】

After: Despite advances in treatment, lung cancer remains the leading cause of cancer death in the United States and globally.

Before: Robots fueled by Artificial Intelligence (AI) are expected to advance significantly over the next years and foster a key element of future societies.【Karnouskos 2021】

After: It is anticipated that robots powered by Artificial Intelligence will make considerable progress in the coming years, playing a vital role in future societies.

Before: The use of environmental taxes is a tool for the optimal allocation of resources to increase social welfare. 【Norouzi 2022】

After: Environmental taxes are an effective means of allocating resources to improve social welfare.

Before: According to the characteristic of fan-coil air-conditioning systems, this paper derives the cooling formula of fan-coil units based on heat transfer theories and puts forward a new method to gauge cooling named Cooling Metering on the Airside, which can monitor the individual air-conditioning cooling consumption during a period of time by detecting the parameters of inlet air condition – temperature and humidity – of the fan-coil air-conditioning system as well as the parameters of inlet cooling water provided by the chiller.

After: The cooling formula of fan-coil units is derived from heat transfer theories. A new method, Cooling Metering on the Airside, is put forward to gauge cooling. The individual air-conditioning cooling consumption during a period of time can be monitored by detecting the parameters of inlet air condition – temperature and humidity – of the fan-coil air-conditioning system as well as the parameters of inlet cooling water provided by the chiller.

Writing out your thoughts

Writing Assistant can work on phrases or sentence fragments. Just describe what you think and it will help you write full sentences.

Before: internet, too many opinions, conflict, no listen to each other, polarized

After: The internet has brought about a deluge of opinions, which has lead to increased conflict as people struggle to be heard. Instead of listening to each other, people have become polarized, only valuing opinions that confirm their own.

After: fNIRS is a more cost-effective option than fMRI for studying brain activity.

After: A total of 11 right-handed individuals (4 males, 7 females), with an average age of 23.5 years, participated in the study.

Writing Assistant understands many languages. Feel free to write in your own language and it will help you convert to English. It does a lot more than translating.

After: The popularity of FNIRS is increasing due to its advantages over fMRI. FNIRS has several unique applications in various fields.

After: Internet addiction among children is a serious mental health issue.

Writing Assistant is able to help you continue your writing.

Before: The sun has the following planets

Before: Immunotherapy is effective in treating cancers. The cancers that have been treated using immunotherapy include

After: Immunotherapy is effective in treating cancers. The cancers that have been treated using immunotherapy include melanoma, lung cancer, kidney cancer, bladder cancer, and head and neck cancer.

Before: Internet addiction among adolescents is a serious problem and causing

After: Internet addiction among adolescents is a serious problem and causing great concern to parents, teachers and health professionals.

Please note that the text may not be facts. Please check literature.

Writing assistants can help you revise not only your papers, but also other written communications such as emails, news, blogs, and websites.

Before: My name is Josh from X University. I admire your work. I want to study under you next year. Is it OK?

After: I am Josh, a student from X University. I have been following your work and I am very impressed. I would like to study under your mentorship and learn from you next year. Would that be possible?

Before: Among the documented medical applications of smartphones is their use in remotely diagnosing strokes (Demaerschalk, 2012; Mitchell, 2011), presentation of radiographic evaluations (Ege et al., 2013), identification of concussion (Curaudeau, 2011; Kutcher, 2013), detection of irregular pulse (McManus, 2012), managing surgical implants (Fakhar, 2013), detecting and preventing falls in aging patients (Mellone, 2012; Sposaro, 2009), medical monitoring (Dunton, 2011; Isik, 2013; Lee, 2011; Maki, 2011; Van Wieringen, 2008), characterization of Parkinson’s disease tremors (LeMoyne, 2010), heart rate monitoring (Kwon, 2011), and Cobb angle measurement in patients with scoliosis (Shaw, 2012). Many of these and other smartphone applications rely on sensors that come standard in today’s smart devices. For instance, each device is equipped with an accelerometer, which measures the acceleration caused by movement and gravity. Importantly, numerous studies have demonstrated that such devices are highly accurate and reliable, rivaling the performance of stand-alone accelerometers (Balg et al., 2014; Demaerschalk et al., 2012; Ege et al., 2013; Izatt et al., 2012; Mellone et al., 2012; Nishiguchi et al., 2012; Ockendon & Gilbert, 2012). The precision of the accelerometers in modern smartphones allows for many of the findings reported above, such as reliable identification of sudden movements related to falling, and real-time measurement of the curve in a scoliosis patients' spine.

Writing Assistant not only rewrote the entire paragraph, but also kept the citations in place.

You may choose "Formal", "Semi-formal", and "Casual" as the output style.

Before: My name is Ming from X University. I admire your work. I want to study under you next year. Is it OK?

After (Formal): As a student from X University, I am deeply inspired by your work and I am interestesd in the prospect of studying under your guidance in the upcoming year. Would this be agreeable?

After (Semi-formal): I'm Ming from X University and I'm a great admirer of your work. Would it be possible for me to study under you next year?

After (Casual): Hey, I'm Ming from X University and I'm a big fan of your work. Would it be alright if I studied under you next year? 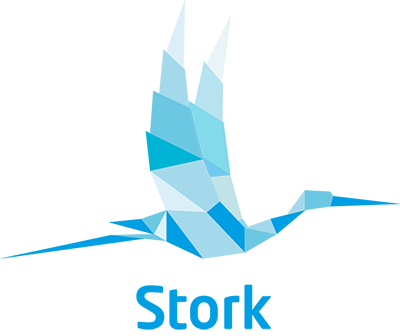 You may use Writing Assistant in our online editor page.